Back to Solutions
Flow Instrumentation
Apr 07, 2020

In many cases, it is necessary to install flow measurement equipment in areas of buildings where the space for piping is extremely limited. This causes a problem since flow meters typically require significant runs of straight pipe upstream and downstream of the installation to work correctly.

Facility operators also suffer financial consequences for generating steam that passes through a flow meter but fails to get measured. These steam losses, known as low-flow cutoff, are associated with the turndown ratio of certain meter designs. 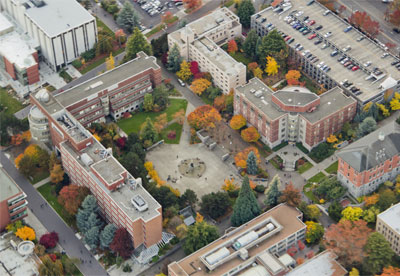 Like other higher education facilities, a large university in the Eastern U.S. sought to improve its steam resource utilization. The university’s library contains approximately 1.5 million volumes, more than 200 computers and has a study capacity for 1,500 users. The building uses steam as part of its heating, ventilation and air conditioning (HVAC) system.

Facility operators at the university had a number of crucial requirements for a steam metering system: 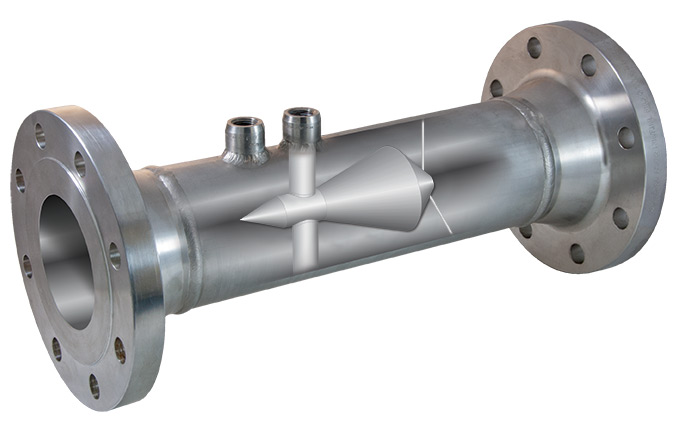 The Preso Cone DP flow meter has a unique cone-shaped element, which shapes the flow profile ahead of the DP measurement port without impacting the flow against a sharp surface. This creates an extremely stable signal for measurement with minimal wear on the cone edge. The meter’s proprietary design also straightens the flow without the need for additional upstream and downstream pipe runs. In some cases, the straight pipe requirement can be eliminated. This makes the Cone meter very useful when retrofitting into an existing piping network where straight runs are few and far between.

A further benefit is that the Preso Cone DP flow meter delivers high performance over a much greater range. The meter shows a linear (after square root) flow response in flow ranges that generates Reynolds Numbers of approximately 5,000–6,000 and higher.

For university and college campuses, the Preso Cone DP flow meter has the ability to handle summer and winter loads much better than competitive ultrasonic and vortex meters. Flexible installation capabilities allow the cone device to perform steam measurement where it’s actually needed—rather than the only place it’s possible—with the assurance of excellent accuracy and turndown.

How the system operates

A DP flow measurement system used for saturated (dry), superheated and unsaturated (wet) steam applications typically has three key parts: the primary element (in this case a Cone meter), the condensate legs (piping between the meter and the transmitter) and the DP transmitter itself. The primary element is wet-calibrated after the manufacturing process to provide baseline data for comparison to field measured data.

The DP transmitter interprets the differential pressures generated by the cone within the flow meter body and calculates the flow rate based off the DP and density measurement. A comparison of the DP transmitter to the calibrated data from the meter can be used to determine if the flow measurement system is reading correctly.

Within the aforementioned system configuration, the condensate legs must be equally and precisely filled with water so they act as an extension of the differential pressure generated at the flow meter. Any air trapped in these legs will cause erroneous readings by the DP transmitter. When the condensate legs are parallel to the ground, it is unlikely that all the air will be eliminated without filling with a pressurized system from the ground up. To add to this issue, any hard-plumbed elbow is a possible area for air to become trapped. Bends in the tubing are more effective than elbows.

At the university library, three Preso Cone DP flow meters were installed as part of the system for steam flow measurement. After initial installation and startup by a mechanical contractor, there were issues with the flow rate data. Badger Meter sent field service technicians to assess the situation and diagnose any potential problems. Previous site visits had determined that the flow meters were paired with the right DP transmitters, and the primary elements were installed properly.

When Badger Meter technicians arrived on site, they examined the DP transmitters to read the calculated flow, differential pressure and static pressure. The transmitter for the first flow meter showed a stable differential pressure at around 5,500 pounds per hour. When the differential pressure, temperature and pressure were compared to the calibrated flow rate, the meter was determined to be calculating correctly. The technicians subsequently isolated and opened the condensate legs to check fluid levels and determined that water needed to be added. After the condensate legs were filled, the meter flow readings increased slightly.

The Badger Meter technicians determined that the DP transmitter was showing a stable flow that re-responded when the flow audibly changed. This transmitter indicated differential pressure, pressure and temperature were correct compared to the flow calculation. The third meter appeared to be the only meter/transmitter that was displaying believable flow rates.

Badger Meter leveraged its extensive experience with flow measurement to ensure the reliability and accuracy of the university’s steam system. After testing both the cone meter and the transmitter, field service personnel pinpointed an installation problem with the condensate legs (piping between the meter and the transmitter), which created the inaccuracies in steam flow readings. The instrument tubing was re-plumbed so that it was not parallel to the ground—but with a constant downward slope—removing the elbows. In addition, the legs were made shorter. These changes addressed the customer’s challenges and allowed for a successful application.

As this project demonstrates, sizing and selecting the right flow meter, ancillary electronics and installation method are the keys to success. End users appreciate knowledgeable and responsive technical assistance to ensure their equipment is installed correctly and performs as expected. Badger Meter is committed to measuring what is important to them with a wide offering of technologies. An effective metering solution is essential for crucial data collection in facility heating and cooling applications.

With Badger Meter’s assistance, this major East Coast university has deployed an accurate and reliable flow measurement solution to help make informed decisions about steam and energy allocation. The use of advanced Preso Cone DP flow meters enables the university to precisely monitor steam distribution and usage with its expansive library facility. Best of all, campus operators can recover the costs associated with decreased energy consumption, which is also better for the environment.

Connect with an Expert