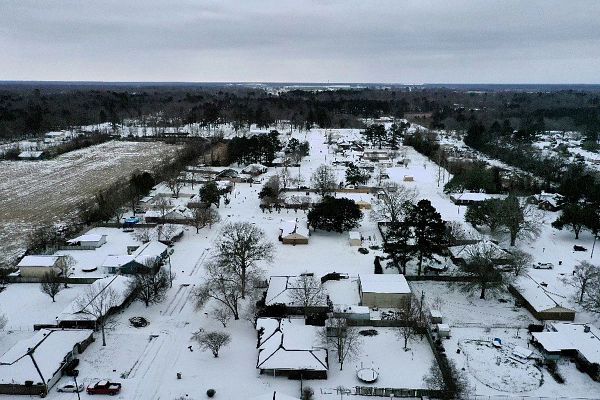 Located about a hundred miles east of Shreveport, the city of Monroe, Louisiana, is home to nearly 50,000 people.

Owing to its humid, subtropical climate, Monroe experiences its share of extreme weather; heavy rainfall, hail and even tornados are not uncommon. But freezing temperatures are one weather phenomenon that can wreak unusual havoc in this southern community.

“We're not used to cold weather here at all,” said Sean Benton, director of Monroe Water System. So when his community was hit with back-to-back winter storms in February 2021, the city came to a standstill. For Benton and his team, however, it was one of the busiest weeks on record.

In the days following the storms, Benton saw his plant demand skyrocket from the normal 16 million gallons per day (MGD) to 28 million. With a plant capacity of 20 MGD, “it was more water than we could produce,” he said.

It was critical that Benton and his team find the cause of the heightened demand before the system lost pressure, or worse, ran out of water entirely.

There was a time, not very long ago, when diagnosing such a sudden spike in usage would have been very difficult for the Monroe Water System. “In years prior, we would have assumed there was a leak in the system,” said Benton. “We would have sent crews out, riding around day and night, looking for blown distribution lines and trying to find the water.”

This time, it was different because less than a year earlier, the Monroe Water System had upgraded its metering system software to one capable of the kind of advanced analysis Benton needed.

Evolving for the Future

For the better part of a decade, the Monroe Water System had enjoyed the benefits of automated meter reading (AMR) through a fixed network system. It allowed the city to modernize its water billing and eliminate manual reads.

But as technology evolved over the years, so had Monroe’s needs. “As we move forward, we’re trying to put a system in place that’s going to be here for the long haul,” said Benton. An important part of that is being able to account for every drop of water in the system.

The Monroe Water System is supported by an enterprise fund, so every dollar collected from customers and bulk water buyers is reinvested in water infrastructure. “We need those revenues coming in to keep maintaining the system,” Benton explained.

A recent change in water rates was another driver for upgrading the metering system. The increase went into effect during summer months when usage is high. “We had homes in some areas—particularly larger homes with irrigation meters and pool meters—whose water bills doubled.” This prompted an onslaught of inquiries from residents concerned that the meters were inaccurate. It escalated to the local news and the water system found itself under heightened scrutiny. But without insight into how water was being used, Monroe did not have the information it needed to convince customers that the meters were working properly.

The Monroe Water System had been a long-time customer of Badger Meter so when the time came to update its system, Monroe welcomed the opportunity to continue the relationship.

“I’d heard a lot of good things about BEACON® AMA and how it could benefit our operations,” Benton said.

In February, rather than dispatching crews out into freezing temperatures in search of a suspected broken main, Benton sat down at his computer and started digging.

“I logged into the BEACON AMA platform and it showed we had over 3,600 locations continuously running,” he recalled. “When I checked again a little later, the number had jumped to 4,800.”

Much to Benton’s surprise, he discovered that the major culprit wasn’t a broken distribution line; most of the demand was coming from customers. “Being an older city, Monroe has a lot of houses off the ground, so we had a lot of frozen pipes and busted lines,” he explained.

Benton recalled one customer location that had used 400,000 gallons of water in the days following the storms. Using BEACON AMA, he could see that the week prior, they’d only used about 4,000 gallons. “We knew at that point that we had some major issues.”

With the data available through BEACON AMA, Benton and his team were able to proactively notify customers whose meters indicated continuous usage.

The experience was eye-opening for Benton. “Without BEACON AMA, we would never have imagined that homes were using that much water.”

In addition to Monroe’s residential customers, businesses also reaped the benefits of BEACON AMA during the storms. “We noticed we had around 1,000 businesses that were continuously running,” he said. With the city shut down for a week, there was nobody at these locations to address leaks. “So we formed a team of in-house personnel that actually went to those locations and turned water off at those facilities.”

Benton soon noticed a positive impact. “We started seeing the demand trending down and the production numbers simultaneously started moving up,” he said. BEACON AMA provided insight into the overall health of the Monroe water system that simply would not have been possible before.

In fact, because the water utility was able to quickly identify and address the source of increased demand, it was able to continue operating throughout the duration of the storms without disruption. “In North Louisiana, there are maybe a hundred water systems in the area,” said Benton. “We were one of only a few that never went on a boil water advisory because we were able to know what we were producing, what we were delivering and streamline it to keep us in the range where we didn't run out of water or have to drop the pressure.”

One Monroe resident became acutely aware of the value of this capability when she was out of town during the February storms. Using the app, she saw that her water usage had gone from 1,000 gallons the previous week to more than 200,000 gallons after the storms. She was able to call her landlord, alert him to the leak and get the water turned off—all from afar.

“That was a bonus for the city as far as trying to cut down our usage and demand,” said Benton. “But it’s also a win for the resident because, at the end of the day, they would have been paying a much higher water bill—and sewer rate, too.”

He noted that “utilization of BEACON AMA and the ability for customers to use EyeOnWater to do their part saved us here. It really did.”

Monroe Water System customer service representatives are on the front lines when it comes to dealing with the public, and they truly appreciate the insight BEACON AMA affords. If a customer calls with a question or complaint about their bill, the customer service rep can access the account and immediately see what’s going on at the location as far as usage data and historical consumption records. In many cases, they are able to resolve the issue right then and there—and take advantage of the opportunity to encourage the customer to sign up for EyeOnWater.

“I’ll tell you, our customers are some of the happiest out there right now,” said Benton, “knowing they have the visibility into their account and how much water they are using at their fingertips.”

The city of Monroe recognizes that water is the foundation of a healthy economy. “If you’re talking about bringing in businesses and new development, it all starts with water,” Benton noted. That’s fueling the city’s pursuit of a major capital investment project to rehabilitate the water treatment plant and expand its production capacity by 10 MGD.

“The development of a new water treatment plant is critical for the future of the quality of water used by every business and citizen in Monroe,” said Monroe Mayor Friday Ellis in his state of the city address in April 2021.

Funding for the project will come from selling municipal bonds, and to attract buyers, you need to have a good water rating. “When bond buyers look at your system, they want to know they’ll get a return on their investment,” said Benton. With the BEACON AMA system, the city of Monroe can be confident that it is accounting for all the revenue in its smart water system, down to the last drop. “It allows us to be more efficient with how we deliver water and how we distribute and collect it on the backend,” he said.

“It’s a massive project, but we are focused on getting it underway in 2021 and securing the future of water quality in Monroe,” Ellis continued. “This means our city will be better able to supply a sudden and extreme jump in demand of water like we saw in the last winter storm.”

For Benton, the BEACON AMA system will be a key component of achieving that objective and having the sustainability that’s needed now and for the future of the city of Monroe.